Father Joseph Murray Abraham was a Canadian Jesuit missionary who dedicated his life to giving education and agricultural opportunities to the poorest people of Kuseong, India. His name lives on through the J.M. Abraham Poetry Award, administered by the Writers' Federation of Nova Scotia to recognize the best book of poetry published in the Atlantic Region each year.

Father Abe, as he was affectionately known, died on August 28, 2012 at the age of 87. Tens of thousands of people from all walks of life thronged to his funeral in Kurseong, high in the Himalayan mountains, to show their appreciation for all he did. Memorial services were also held in Calgary, Vancouver, and Toronto.

“He was arguably one of Halifax’s most ingenious sons,” wrote WFNS member Kathleen Martin in a 2012 story in Progress Magazine. “Many of his greatest lessons, he would tell you, came from observing how Atlantic Canadians find innovative solutions with limited resources. How to treat people with kindness. How to share hardships. How to tell a story. How to keep trying. How to ask friends for help.” 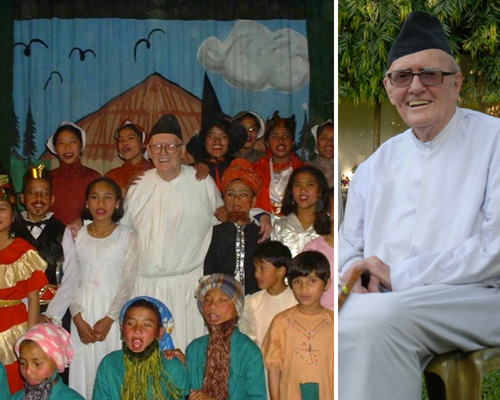 A picture of Father Abraham surrounded by kids at the end of a production of The Wizard of Oz. "He felt it was important that the poor have access to theatre, so he would rework plays to include as many children as he could in them," says Kathleen Martin. "He would then would put on a big meal so that their families could eat and watch the play."

Kathleen was a little girl when she first met Father Abe, a cousin of her mother’s. She remembers him as an inveterate writer and lover of poetry. As a remembrance of a remarkable man, the Writers’ Federation of Nova Scotia’s Atlantic poetry prize was named in his honour.

A Jesuit for 70 years, Father Abe volunteered for the Canadian mission in Darjeeling in 1948. India had just achieved independence when he arrived. His first years in India were spent completing a degree in theology and learning the Nepali language. During this time, he was also put in charge of a boys' orphanage that was attached to the parish school. This was his first taste of the problems faced by the poorest of the poor. It was also when he began his practice of asking family and friends in Canada to help their Indian brothers and sisters. He mobilized his mother and the ladies group at her church to make warm flannel pajamas for all the boys. After graduation he was assigned to St Joseph’s North Point, in Darjeeling – teaching children of affluent families. He was an outstanding teacher, but his heart was always with the disadvantaged who were everywhere.

In 1959 he was assigned to take over St. Alphonsus high school in Kurseong. Housed in an old hunting lodge, the school building was a ramshackle affair, never intended to hold as many students as it did. In 1960, he returned to Halifax to complete a Masters in Education at St. Mary’s University. Then he drove his mother’s car across Canada asking Canadian friends to help him build a new school by giving up family dessert one night a week. With pledges from over 1200 families Father Abe returned to India in 1962 ready to build his school.

Political events, however, caused massive inflation in the price of building materials. He could no longer afford to buy the cement he needed to build the new school. So he made it--out of the mountain against which the school stood.  With every student, teacher and administrator working two periods a day for ten years, they chipped away the mountain, which poor workers then turned into concrete blocks, and built the new St. Alphonsus School, completing it in 1972. Their motto was “the best education we can give to the poorest children we can find.” It stands to this day, a high school for more than 1,000 students.

But there was more. He started a poultry of 3,600 birds on the school roof, dividing the fowl into small ‘businesses’ of 300 to 400 each. These were managed by children whose tuition was being paid by an increasing family of friends in Canada. The students learned the practical uses of math and science, as well as the value of teamwork. When Fr. Abe left St Alphonsus after more than 20 years, former students joined him to set up another enterprise in 1978:  the St. Alphonsus Social and Agricultural Centre (SASAC).

There he pioneered programs in biogas and Square Meter Vegetable Gardening, a method for organic farming in small spaces. Once the techniques were perfected, his young people went into neighbouring villages to teach poor farmers, who had only small, rocky plots to work, how to dramatically increase the yield of their land, grow crops that brought higher prices, and maintain healthy gardens without chemicals. Fr. Abe also build villages for poor families, and pioneered organic mushroom growing, an ideal small, home-based business for poor women.

A prolific writer and mesmerizing public speaker, Father Abe drew in an army of Canadian friends who supported his projects and with whom he kept in regular correspondence over more than 50 years. Even after retiring, well into his eighties, Father Abe began writing a daily poem, a “Rhymed Reflection,” which he shared via email with his friends. He continued this practice almost until his death.

For further information on J.M. Abraham and the work he did in India, please see this documentary called Louder Than Words, The Story of SASAC (Saint Alphonsus Social and Agricultural Centre). It was produced in 2006 by Priscilla Wyrzykowski.

"Pacem in Terris" is a poem J.M. Abraham wrote in response to Pope John XXIII’s encyclical Pacem in Terris, Peace on Earth. Father Abe's Pacem in Terris was published originally in the Sacred Heart Messenger at Christmas time in 1963.