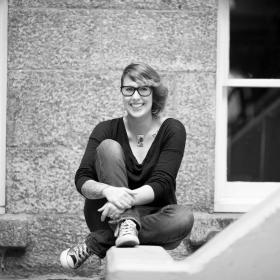 How long have you been writing? What drew you to writing in general, and non-fiction in particular?

I’ve loved books for as long as I can remember. My mom is a book lover and was a librarian, so there was never any shortage of reading material around the house. Once I learned to read, my interest in writing just grew organically from there. I loved stories, mainly fiction, and I was enthralled by the idea of creating my own worlds, and characters to inhabit them.

When I look back at my childhood, I think there were a few formative moments that really put the idea of being a writer in my head. The first was probably the summer I read the Emily of New Moon books. Our family had an old farmhouse in Petitcodiac, and there were a bunch of old copies of L.M. Montgomery books there. I remember really identifying with Emily and her desire to be a writer.

Budge Wilson also had a significant role in all this. My elementary school had a creative writing contest, with winners from each class. The prize was lunch in the library with Budge Wilson, and I was lucky enough to be one of them. I remember her reading my story and telling me what she liked about it. I don’t remember the specifics of the story or what she said, but I do remember her words making me feel like maybe I could be an author someday. It was probably just a small moment for Budge, but it was a big one for me!

Over the years, I kept writing and writing. I took Enriched English in high school (in NB), which focused less on grammar (sorry to my copy-editors) and more on creative writing. Then I went on to get an English degree (the university career counsellor asked me what I was interested in, and I said “books,” and that was that).

In university, I worked at Woozles, and when I graduated, I got married, we bought a house, had kids, etc., and bills needed to be paid. I took a job at an insurance company, hated it, tried a job at another insurance company, still hated it, and managed to escape just after my now six-year-old was born. I got the leg up from my neighbour, Sheila Blair-Reid, who used to own Metro Guide Publishing. She taught me how to pitch magazines, and connected me with a few of the local ones. While I was on mat leave, I started pitching magazines, and developing a relationship with a few editors, in particular Trevor Adams at Halifax Magazine and Dawn Chafe at Atlantic Business Magazine. I also got a couple of web writing clients around the same time, and by the time mat leave was over, I was able to write full time.

I’ve been lucky to have Trevor as a mentor over the last few years—I consider his mentorship my unofficial journalism degree. I’ll get to that non-fiction part when I answer the next question.

In addition to being the author of several books, you have extensive experience in journalism. Did you find the shift to writing books challenging? Did your background in journalism help you in this experience?

It’s funny, because my shift to books was almost accidental. I feel incredibly lucky, because it’s the culmination of a dream that I’ve had since I was a kid, and it only happened the way it did because one of my Halifax Magazine articles took off. I wrote an article called “50 Things You Don’t Know About Nova Scotia,” and it went, well, we’ll call it Nova Scotia Viral. It occurred to me that if there’s that much interest in a listicle on the topic, there would probably be interest in a book. I also wanted to flesh out my research around some of the facts in the article, so it just made sense to pitch it to a publisher.

So I did—I pitched Nimbus Publishing, and they took on the project. For me, the shift from articles to books was pretty simple overall—this first book was basically a series of 100 articles, so I used the same skill set.

I’ve written two non-fiction books since then, and have another one on submission. But I also have a few fiction ideas, and those are next on my list.

Your latest book, Be Prepared: The Frankie MacDonald Guide to Life, the Weather, and Everything, was a collaborative project. How did you find working on a book with someone else?

This one was definitely a shift for me! I’m a freelancer, so I’m on my own most of the time—I don’t really have the opportunity to collaborate very often. I was also collaborating with someone who had a much bigger stake in the project than me—after all, it’s Frankie’s life! So for both of those reasons, my first objective was to really get to know Frankie, and then figure out a way of collaborating that worked for both of us.

In the end, our collaboration was a very organic one—Frankie provided a timeline of major life events and accomplishments, and I interviewed Frankie and some of the important people in his life. Then I compiled all the information, figured out what the book would look like, and started writing the biography component. I sent Frankie a lot of clarifying questions on Twitter, and he sent me his answers back the same way. Then Frankie and I passed the drafts back and forth, with Frankie letting me know when I needed to correct something, until that piece was done.

For the weather component, I sent Frankie a list of weather questions I thought kids would be curious about, and he answered them. I added details by doing my own research as well. Overall though, it was a great collaboration. I just had to go with the flow.

What do you love about living in Nova Scotia?

For starters, the ocean! But I also love my community, particularly my writing community. I’ve met so many wonderful people through my work, and I love living in a small city where I run into them regularly.

Keep writing and keep reading! Find other writers and hang out with them! Spend time developing your craft. But more than anything, be willing to take advice and accept criticism. When I look back, it’s the tough times that made me a better writer. It was the magazine editor who made me re-write my article, the writing mentor who told me that all my characters sounded like “slightly different versions of the same schmuck,” and the book editor who asked me to delete a giant chunk of my book because it didn’t add to the story.

What do you do when you have writer’s block?

I don’t really believe in writer’s block (a controversial stance, probably). Writing is work. It happens to be work I enjoy, but it’s still work. If you’re a professional writer, you don’t just stop writing because you’re uninspired. You get up most days, and sit at the keyboard, and put words on the screen. Sometimes they flow out of your fingers, and sometimes it’s a slog, but you still write.

On the days when I don’t feel inspired (which is often!) I just sit down and push through, even if the first couple paragraphs are garbage. I can always cut them or change them later.

Right now, I have a non-fiction middle grade book on submission. I’m also revising a picture book, developing an idea for a middle grade graphic novel, and doing research for a utopic middle grade trilogy!