John Wall Barger is the author of three books of poetry, including Hummingbird (Palimpsest Press, 2012), which was a finalist for the 2013 Raymond Souster Award. His latest title is The Book of Festus  (Palimpsest Press, 2015), and he has a new collection, The Mean Game, due to be published by Palimpsest Press next year. In the following, he talks to us about taking the writing chair even when you don’t feel like it, travel poems, and what he loves about Nova Scotia. 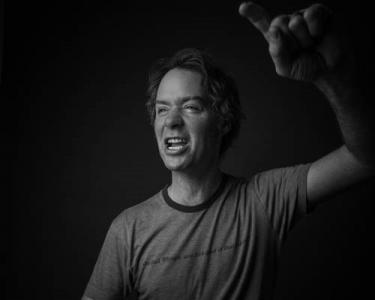 What do you love about Nova Scotia?

The ocean! The smell and constant low roar of the ocean.

What’s the biggest misconception about being a writer?

Read. Foster a deep hunger for reading. It’s shockingly easy to tell if a writer has not read very much. The lines lack density, allusion, and freshness. I don’t think there’s any writer I love who hasn’t been obsessed with reading.

While you grew up in Nova Scotia, you’ve moved around and travelled quite a bit. What role does travel play in your writing?

I love setting poems in “foreign” places. My second book, Hummingbird, is set in Mexico and India. I have a long poem called “Smog Mother” about a day in Bangkok. I think the criteria for a good travel poem is the same as for any good poem. The context of the “strange” place can be used, but should not be allowed to do any of the heavy-lifting of the poem. Better to avoid that tone which says it’s neat to be in a neat place. The language must always be fresh, and the images surprise. For example, Neruda’s “Heights of Macchu Picchu” is full of awe, but he avoids the uncomfortable (Facebook-selfie-esque) ego moment, where the audience is intended to take note of what a wonderful life the poet has. Instead Neruda explores the limits of his own heart, and the heart of humankind—and gives voice to the oppressed masses, and many other things!

This week: the Bourne movies. I have a terrible lack of discretion when it comes to movies. I love the terrible ones (all by M. Night Shyamalan) and also the “boring” ones (Tarkovsky’s “Stalker”!).

Definitely. If the teacher allows for class discussion, she must think on her feet, which can be a very creative process. If she allows space for students to influence the trajectory of the class, this can also be creative. And both teaching and writing involve a kind of performance and exchange. However, teaching has an unavoidable power dynamic, and is of course didactic, both of which are better to steer away from with writing.

What do you do when you have writer’s block?

I write through it. I leave it up to future-John to figure out what is good and bad and just try to darken the page every day.

What would you do if you weren’t a writer?

I hope I would be an artist of some kind. I’m happy to be lucky enough—in so many ways—to be able to spend my time making art. If it wasn’t poetry, I might write novels. I also like painting and drawing. Or filmmaking. Or photography. Or land art. Something! If I wasn’t making art—if the part of my brain that loves to make stuff was, for example, damaged in a train crash—maybe I could finally commit to teaching? I’ve always been close to universities, putting one adjunct toe into the academic ocean. But that might not work because my desire to teach (English lit/poetry/essays) is shackled to my creative life (writing poems/essays). I’d hate to slog through work that doesn’t rivet me, though I know that’s what 99% of the world has to do! I guess whatever type of work it was, I’d try to become obsessive about it and find a way to enjoy it.

I’m revising my next poetry collection, The Mean Game, which comes out with Palimpsest Press next spring (2019). Palimpsest said yes to it a few years ago, and I haven’t thought about it much since then. Two weeks ago I received a message from Palimpsest editor Jim Johnstone saying it’s time to send him the ms for edits, and my heart jumped into my mouth. I think anyone who has published a book knows this feeling. Are the poems actually ready? I don’t know! I wrote the first of them ten years ago, and the idea of it as a collection came at the 2010 Banff Writing Studio. I’ve written half of the ms since then, and most of it has been published. But their age, and their having been published, makes it tricky to revise them. They seem concrete already! So I have been wrestling with these poems, trying to be true to my original intentions, updating and sharpening as I go.